Whoville Roast Beast Sandwiches are a Who and Grinch approved version of a French Dip sandwich. Seasoned, shredded beef is piled onto a club roll and served with a rich, beefy gravy.

It is said that The Grinch could not stand the Who's Roast Beast, yet by the end of the story it is he himself who carves the roast beef. Personally, I think The Grinch was just exaggerating, because who doesn't like roast beef? Especially when it's piled up high on a cheesy, toasted roll and dipped into a rich gravy?

So I strongly believe that The Grinch and all of the Who's down in Whoville would heartily approved of my Whoville Roast Beast Sandwiches.

What is a Whoville Roast Beef Sandwich?

This Roast Beast (or beef) Sandwich is made from a seasoned and seared then slow cooked roast. The beef is shredded and then placed onto cheesy, toasted club rolls, along with pickled peppers. The whole sandwich is then dipped into a hearty and rick gravy. If you ask me, this is what happens with the leftover roast beast from the Christmas feast - it's turned into a French Dip style sandwich.

This sandwich is the perfect combination of a French Dip sandwich and an Crock Pot Italian Beef Sandwiches.

First, season and sear your beef roast. Combine Italian seasoning, garlic powder, onion powder, salt and pepper together. Spread this all over the roast. Then add a splash of olive oil to a heavy bottomed pan over medium high heat. Sear the roast for 2-3 minutes on each side until it's just browned.

Meanwhile, prepare the slow cooker. Pour the beef broth and Worcestershire sauce into a slow cooker and layer the sliced onions and bay leaf on top.

Next, make the gravy. Strain out 1 ½ cups of the liquid and add it to a medium saucepan along with 1 ½ cups of cold water. Whisk in the Au Jus gravy packet and heat over medium high heat until it comes to a boil, whisking frequently. Once it reaches you desired consistency, remove from the heat.

Then prepare the sandwiches. Line a baking sheet with foil and set your oven to broil. Slice open club rolls and layer with cheese. Broil for 2-3 minutes, watching closely, until the cheese has melted. Add the shredded beef and onions, along with pepperoncini to the roll.

Finally, serve the sandwiches. Place prepared sandwiches on a plate and divide gravy into small dipping bowls. Serve immediately, and enjoy the sandwich by dipping it into the gravy with each bite!

Beef - a chuck roast, top roast or bottom round roast will all work for this recipe. See the FAQ below for more details on each cut of meat.

Seasoning - replace the individual seasonings with one packet of Italian seasoning dressing mix.

Gravy - you can make your own gravy using the liquid from the beef. Strain juices from the meat and set aside. Melt 4 tablespoons of butter in a saucepan and then whisk in 1 ½ tablespoons of flour. Once combined, slowly pour in 2 cups of the liquid the beef cooked in, and stir frequently until it boils and thickens.

Serving Suggestions - serve these french dip sandwiches with french fries, mashed potatoes, and a green vegetable like my Garlic Parmesan Green Beans or a salad.

What is the best type of beef roast for shredded beef?

Chuck roast will be the most tender option and in this recipe will cook in 8 hours. Top round or bottom round are alternatives, but are tougher cuts and will need closer to the 10 hours listed in this recipe to fully break down.

What are French Dip sandwiches?

French Dip sandwiches are hot sandwiches, served with shredded beef on a cheesy, toasted roll and are dipped into an Au Jus gravy, which translates to 'with juice'.

Is roast beast a real thing?

If you ask the Who's in Whoville, yes. But good luck finding it in a store! 🙂 It's pretty safe to assume that what the Grinch and Who's refer to as roast beast is what we would call roast beef. 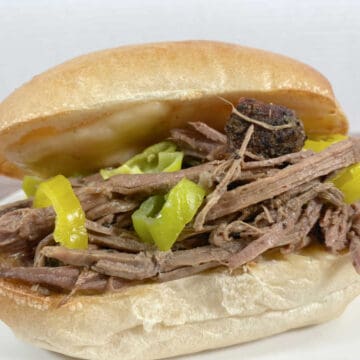