Aside from butterbeer and the occasional hard candy that reminds me of my grandfather, I am not a big fan of butterscotch flavored items. Calvin, however loves them, and when we decided to have a going away party for him, I knew that I needed to find a butterscotch dessert to make.

I had recently bought Sally's Baking Addiction and easily got mesmerized at all the pretty colors in the book. (You have too, right?) She has a lot of tasty looking cupcake recipes so I headed on over to her blog to see if she had something that could work.

Of course she did!  She's apparently as much of avid butterscotch lover as Calvin is, so it only made sense to use her recipe. 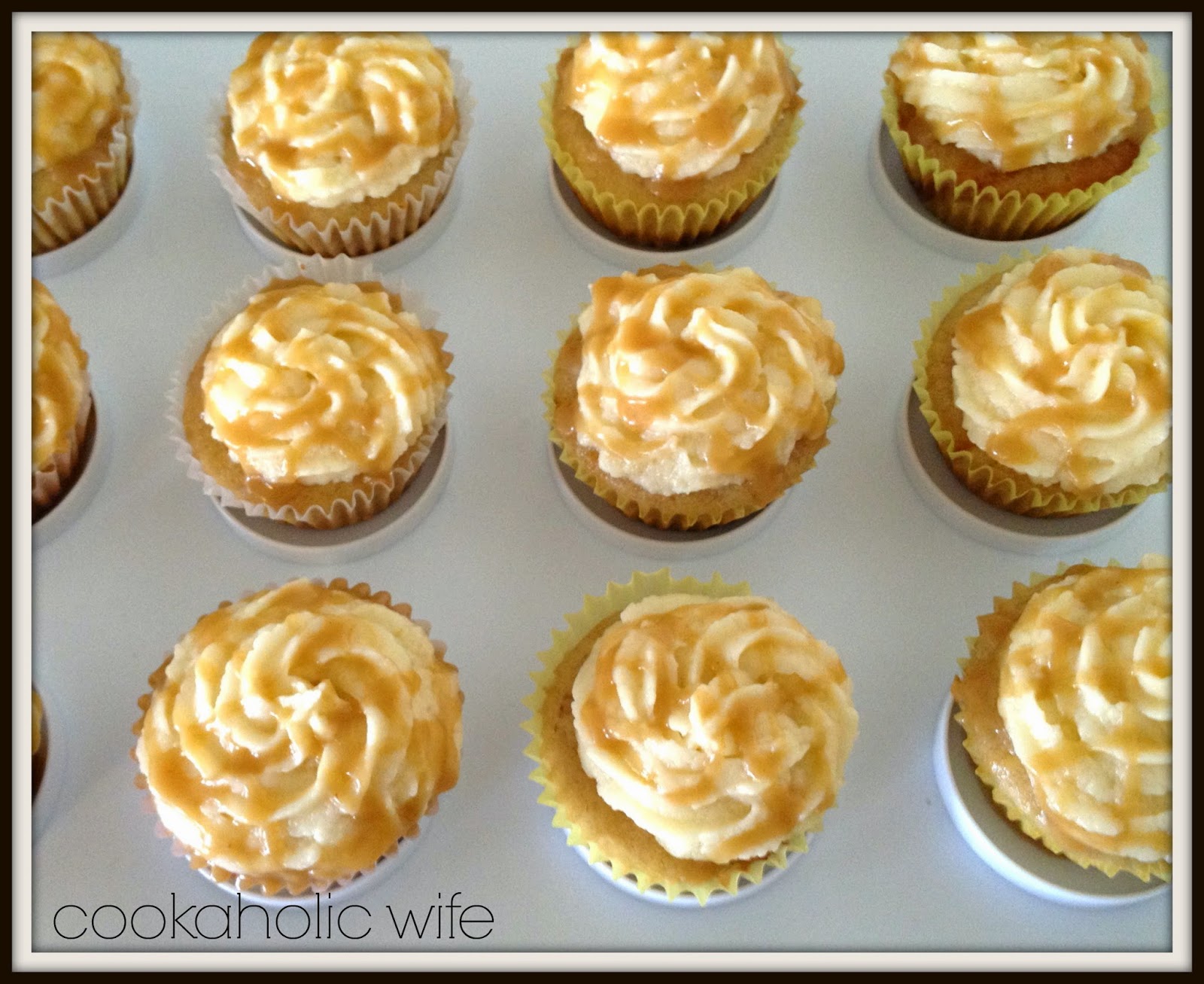 for the butterscotch sauce:

for the vanilla frosting:

Directions:
1. Preheat the oven to 350. Line a cupcake pan with paper or foil liners.
2. Whisk together the flour, baking powder, baking soda and salt in a medium bowl.
3. Melt the stick of butter in a medium bowl, then whisk in the brown sugar until no lumps remain. Whisk in the egg, milk, yogurt and vanilla until combined.
4. Slowly mix into the wet ingredients until no lumps remain. The batter will be thick. Divide evenly into the prepared cupcake pan.
5. Bake for 20 minutes then allow to cook completely before adding the butterscotch sauce.
6. While the cupcakes are cooling, prepare the butterscotch sauce by melting the butter in a medium saucepan over medium-high heat. Whisk in the brown sugar and cream and allow the mixture to bubble and thicken for 5 minutes. Do not stir.
7. Remove from the heat and stir in the vanilla and salt. Allow to cool until you can transfer it into a squeeze bottle or pastry bag with a small tip.
8. Once the butterscotch sauce and cupcakes have cooled, fill the cupcakes with the butterscotch. Press gently into the top of the cupcake and squeeze lightly until the butterscotch flows through the cupcake. Repeat with remaining cupcakes.
9. Prepare the frosting by beating the butter on medium speed in the bowl of a stand mixer with the paddle attachment for 3 minutes or until smooth and creamy. Add the powdered sugar, cream and vanilla and beat until fully combined.
10. Add more cream if the frosting is too thick. Add more powdered sugar if it is too thin. If the frosting is too sweet add ¼ tsp. salt and increase from there until it reaches your desired tastes.
11. Transfer the frosting to a piping bag affixed with a tip and pipe the frosting onto the cupcakes. Drizzle some of the remaining butterscotch sauce on top of the cupcakes. 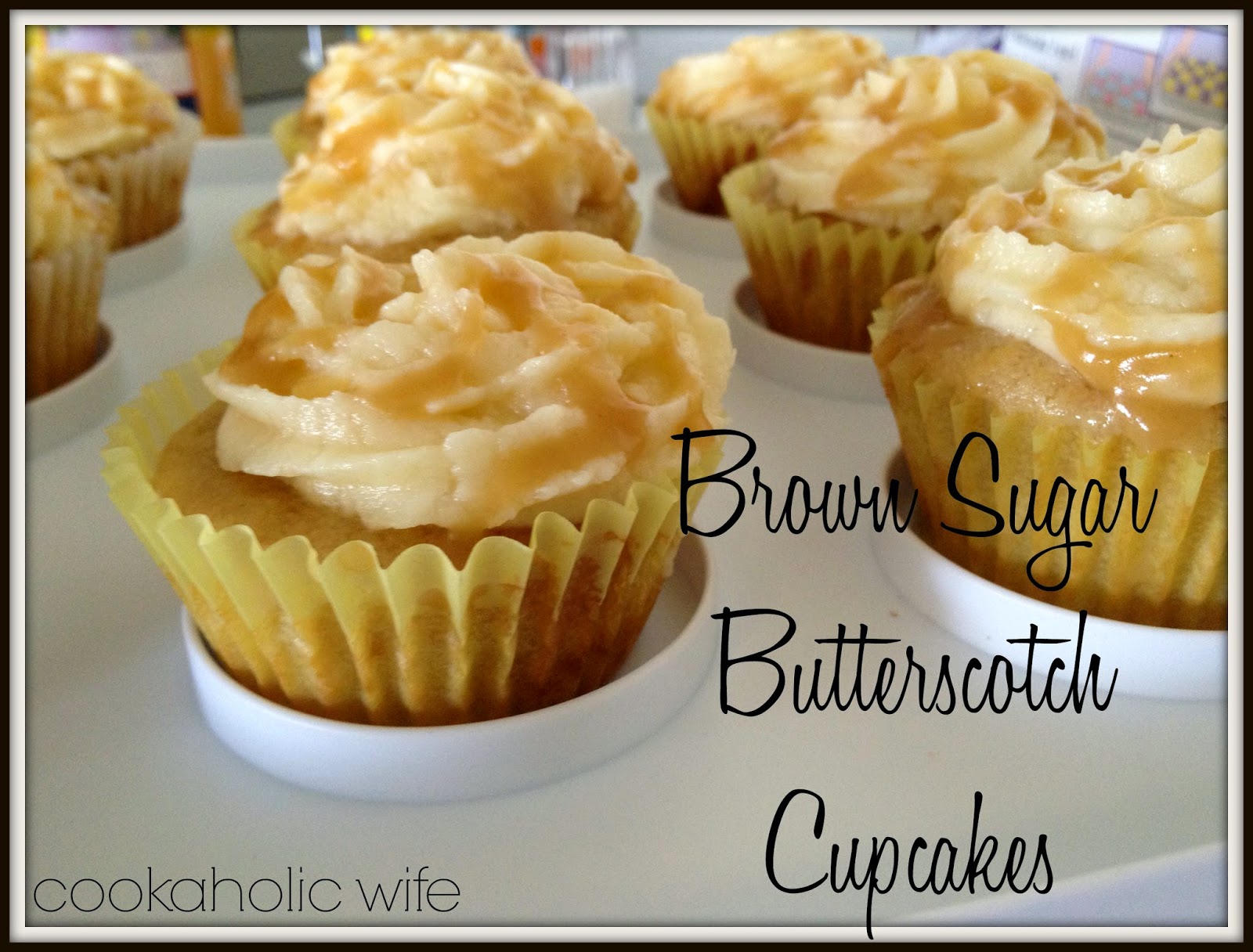 These can be made a day in advance. I waited until a few hours before the party to drizzle the additional butterscotch on top but otherwise they held up just fine.
They were a bit too sweet for my tastes, but everyone else who is a butterscotch fan really enjoyed them!
« Improv Challenge: Vanilla Bean and Bacon S'mores
Pan Fried Corn Fritters »