Red Velvet Cupcakes are a light and airy cupcake topped with cream cheese frosting. They're perfect for Valentine's Day or any day!

I like to cut off the bottom of the cupcake and place it on the top, creating the perfect cupcake and cream cheese frosting sandwich. Is that just a me thing?

What are red velvet cupcakes?

Red Velvet Cupcakes are a chocolate buttermilk cupcake that is most commonly topped with a sweet cream cheese frosting. The cake gets its name from the cocoa powder, buttermilk and vinegar mixing together to create a dark red hue. Food coloring can be added to further enhance the red color.

Question: Am I the only one who immediately thinks of the armadillo groom's cake from the Steel Magnolia's movie when I hear red velvet cake?

Start off by preheating the oven to 350 degrees. Line two cupcake pans with liners.

Then, combine your ingredients. First combine the buttermilk and red food coloring in a measuring cup until fully combined. Next, in a small bowl, whisk together the baking soda and vinegar. Set both aside. Then, in a large bowl, sift in the flour, followed by the cocoa powder, then the baking powder and salt.

Next, mix the ingredients in your stand mixer. Add the butter and sugar to the bowl of the stand mixer and beat on medium speed until light and fluffy, about 3 minutes. Add in the eggs, one at a time, followed by the vanilla.

Then turn off your mixer. Add in ⅓ of the flour mixture, followed by ⅓ of the buttermilk. Repeat until both are used, and follow that with the baking soda and vinegar mixture.

After that, bake your cupcakes! Divide the batter into the cupcake pans, filling each ⅔ to ¾ of the way full. Bake for 18-20 minutes. Transfer to a wire rack to cool.

Meanwhile, prepare your frosting. Add the cream cheese and butter to the bowl of a stand mixer and beat on medium speed for 4-5 minutes. Pour in the vanilla and then begin adding in the powdered sugar, ½ cup at a time until fully combined. Taste, and add salt if the frosting is too sweet.

Finally, frost your cool cupcakes. Once the cupcakes have fully cooled, transfer the frosting to a piping bag fitted with a large tip. Pipe the cream cheese frosting on the cupcakes.

What is the history of red velvet cake?

I researched the cake for a while and the history is uncertain. Some say it dates back to the Victorian era when making cakes with cocoa powder was a luxury and "velvet" was added to the name to let people know it would be a light, smooth cake. Other's say it was created in the 1800's. Some say it originated in Maryland, while other's say it was invented in the more southern states of the US.

Is red velvet cake made with beets?

It can be. During WWII when foods were rationed, many bakers began using beet juice in their red velvet cakes. It kept the cake moist and provided the red coloring. Now, many red velvet cakes are enhanced with red food coloring.

Why is red velvet cake served on Juneteenth?

Many foods eaten on Juneteenth are red, to represent the bloodshed that occurred during slavery in the United States.

Do you have to use food coloring in red velvet cake?

No. A chemical process occurs when the cocoa powder, buttermilk and vinegar combine, which creates a dark red hue. Which is still red velvet cake. The vivid red hue comes from the addition of food coloring, but it is not necessary.

How is red velvet cake different than chocolate cake?

Red velvet is a chocolate cake, however, buttermilk and vinegar are added which creates a smoother, richer flavor to the cake. A classic chocolate cake may be enhanced with coffee to bring out the chocolate flavor, or not at all.

Do you need to refrigerate red velvet cupcakes?

If you use my cream cheese frosting, then yes you should refrigerate your cupcakes. Cupcakes will keep at room temperature for a few hours. Store in the fridge in an airtight container.

Baked, cooled cupcakes can be wrapped and frozen for up to 3 months. Baked and frosted cupcakes will keep in an airtight container for a few days in the fridge. 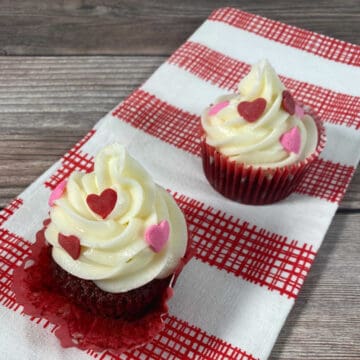