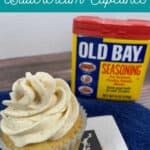 Old Bay Buttercream Cupcakes are such a Maryland dessert. Vanilla cupcakes have a hint of Old Bay seasoning baked in and are topped with an Old Bay spiced buttercream frosting.

There's a saying that if you are from Maryland, you put Old Bay seasoning on everything. To be honest, it's pretty accurate and these cupcakes are the absolute definition of that. I recently saw a recipe for a Smith Island cake, which is our state cake, but instead of the classic yellow cake with chocolate frosting, it was a vanilla cake with Old Bay buttercream.

How could I not make that? These cupcakes called to me deep down in my Maryland soul!

What are Old Bay Buttercream cupcakes?

Old Bay Buttercream Cupcakes are the most Maryland recipe I think I've ever made. They would be most similar to a spiced cake recipe, just with a Maryland twist. These delicious sweet and salty cupcakes start with a basic vanilla cupcake base, then some Old Bay seasoning is added in. Then these cupcakes are topped with a classic buttercream flavored with Old Bay seasoning.

Then, whisk together the dry ingredients. In a medium bowl, combine the all purpose flour, baking powder, salt and Old Bay seasoning. Set aside.

Next, beat the butter. Add the butter to a stand mixer and beat on medium speed until light and fluffy. Then add in the sugar and beat for another minute. Follow that up with adding in the eggs, one at a time, until fully combined, followed by the vanilla.

Then, complete the batter. Add in half of the dry ingredients, followed by half of the buttermilk, then repeat. Divide the batter into the prepared cupcake pan filling ⅔ of the way full.

After that, bake those cupcakes! Bake the cupcakes for 20-22 minutes. Transfer to a wire rack and let cool completely.

Meanwhile, prepare the Old Bay buttercream frosting. Add butter to a stand mixer and beat on medium speed until light and fluffy. Add in the Old Bay, followed by the powdered sugar, ½ cup at a time until fully combined. If needed, add in a splash of milk to thin out the frosting.

If you'd like to try this cupcake before making them on your own, there is a bakery located in Bel Air, Maryland that makes a similar version. Their cupcake is a vanilla base topped with a caramel buttercream that has a Old Bay salted caramel drizzle. It's not a standard cupcake for them, so you'd need to call ahead to make sure it's on the menu.

So what does an Old Bay Buttercream cupcake taste like? Well, it kind of tastes like spice cake, if the spices in the cake were seafood seasoning. I thought it was different but delicious. (This may be because as a lifelong Maryland resident, I likely have Old Bay in my veins.) My husband, who hails from PA, was absolutely not impressed. 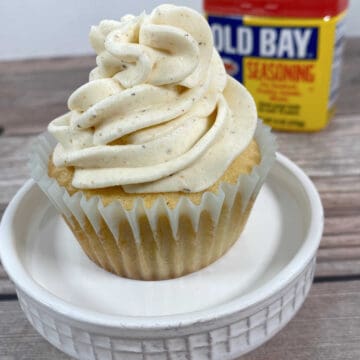