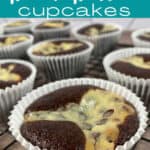 Baltimore Black Bottom Cupcakes are a chocolate cupcake filled with a cheesecake center. These cupcakes are commonly found all over Baltimore.

Update: This recipe was originally shared in June 2018. The recipe and photographs have been updated and republished in October 2022.

Ironically I don't remember much about the food I ate in my childhood (I was extremely picky and there wasn't much), but I've always remembered these black bottom cupcakes. My mom didn't bake often, but could make these cupcakes and I remember enjoying them quite frequently.

What are Baltimore Black Bottom Cupcakes

I did a ton of research on these cupcakes and I cannot find a true history of them. Baltimore Black Bottom Cupcakes are a chocolate cupcake with a cheesecake-like filling dolloped into the center and then baked. The cupcakes are not frosted.

Nearly every grocery store, bakery and deli in Maryland sells these cupcakes but I think the homemade ones are the best. Once you're outside of the state, they seem to disappear.

Then mix up your dry ingredients. In a large bowl, or the bowl of a stand mixer, combine the flour, sugar, cocoa powder, baking soda and salt.

Next, mix in the wet ingredients. Stir in the water, vegetable oil, vinegar and vanilla until fully combined. (The batter will be really thin.)

Then, mix up the filling. Beat cream cheese until smooth, then add in sugar and beat for 3 minutes more. Then add in the egg and vanilla, mixing until fully combined. Finish that with a pinch of salt. Then pour in the mini chocolate chips, mixing until combined.

Next, add the filling to the batter. Drop a heaping tablespoon sized amount of the cream cheese filling into the center of the batter. Less is more, these cupcakes rise and you don't want them to overflow.

Finally, bake the black bottom cupcakes! Bake the cupcakes for 30-35 minutes, until the cheesecake center is just set and barely golden brown. Remove from the oven and let cool on a wire rack for 5-10 minutes before removing from the cupcake pan and cooling completely.

Rather watch a video? Check out my Baltimore Black Bottom Cupcakes on TikTok!

Do you need to store black bottom cupcakes in the fridge?

Yes, black bottom cupcakes should be stored in the fridge because of the cream cheese filling. They're okay on the counter for a few hours, but actually are even better when served cold.

Are black bottom cupcakes the same thing as tuxedo cupcakes?

Yes and no. I've found conflicting information on this as well, as sometimes a tuxedo cupcake can mean a chocolate cupcake with vanilla frosting.

Remove the cream cheese from the wrapper and place on a microwave safe plate. Microwave for 10-15 seconds at 50% power until softened.

Why is there vinegar in a black bottom cupcake recipe?

Combining vinegar and baking soda into a cake or cupcake recipe means the cake will be very light, airy and moist. When combined with the cheesecake filling, it's almost like you're eating the combination of a cheesecake cupcake/brownie. 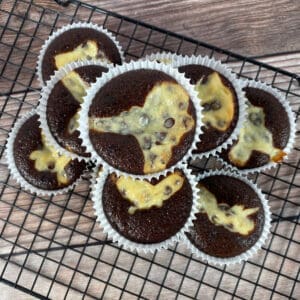