Happy Valentine's Day!
Do you have plans for this evening? Personally, I'm not a fan of going out on the actual day. Restaurants jack up their prices, the servers are rushed and pretty much anyone in the industry would rather spend it with their significant other than working, so you get sub-par service. Plus, even to visit a chain restaurant you pretty much need to make a reservation 2-3 weeks in advance. A well-known, higher end restaurant? You better call in early January!
But, I figured there was no better of a day than the one known for sweets to share a deliciously sweet recipe with you. These cupcakes are just incredible. It's not very often I want more than one cupcake in a serving, but I could have easily ate 3-4 of these because they aren't super sweet. However, because these were eaten so quickly, I completely forgot until I had popped the last bite of the last cupcake in my mouth, that I never took a picture of the inside. So just believe me when I tell you its well worth what you can't see. 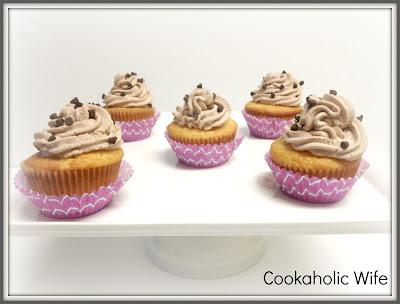 Directions:
1. Preheat the oven to 350. Line a cupcake pan with paper liners.
2. Combine the butter and sugar together in the bowl of your stand mixer with the paddle attachment. Beat on medium speed until light and fluffy.
3. Meanwhile, combine flour, baking powder and salt together in a bowl. Set aside.
4. Add eggs, one at a time to the mixer, until fully combined. Then add in the yogurt and vanilla extract.
5. Once everything is combined, reduce the mixer speed to low and slowly add in the flour mixture until a batter forms.
6. Divide the mixture evenly into the prepared cupcake pan. Bake for 20-25 minutes or until a toothpick inserted in the center comes out clean.
7. Remove from the oven and let cool in the cupcake pan for 5 minutes before removing to a wire rack to cool completely.
8. Squeeze all of the excess liquid from the ricotta cheese (or drain overnight). Place the ricotta, mini chocolate chips and sugar in the bowl of the stand mixer with the paddle attachment and beat on low speed until fluffy.
9. Cut out the center of the cupcakes using a paring knife. Discard the centers. Transfer the ricotta mixture to a piping bag with a tip large enough for the mini chocolate chips to pass through and pipe into the center of each cupcake.
10. Prepare the frosting by combining the heavy cream, sugar and cocoa powder in the bowl of your stand mixer with the whisk attachment. Start on low speed and increase to medium-high beating until stiff peaks form.
11. Transfer to a large piping bag with a large star tip and pipe the frosting onto the cupcakes. Sprinkle the mini chocolate chips over each cupcake. Refrigerate until ready to serve.
I highly advise that you find an excuse to make these cupcakes ASAP!

I'm also going to cheat and say that this counts as making cannoli from my 28 Before 28 list, because well, I didn't specify cannoli vs. cannoli filling right? 😉