You may notice some changes around here if you're not reading this through a Reader today. There are still a few kinks to work out, but I expect to have everything looking as it did before (well, kinda) by the weekend.

Now that I've bought the proper Wilton tips to use, I really like making cupcakes. First, their portion control and second, for someone like me who really isn't a fan of cake, its just the right amount for me to enjoy.

Cupcakes appear to be the new thing, everyone is making them and finding more and more stuff to put on or in them. I am a fan of just a simple cupcake with a simple frosting, but when we decided to have a New Years Eve party, I decided to go all out for desserts. Two cupcakes on Annie's blog immediately caught my eye as "fancy" enough for a NYE party.

These were the first. 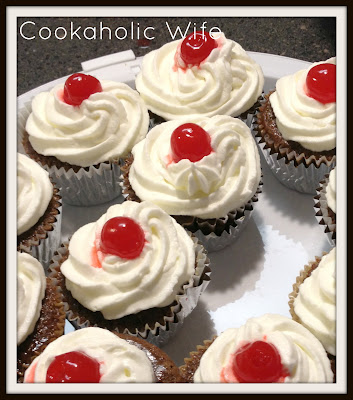 Directions:
1. Preheat the oven to 350. Line a cupcake pan with 12 liners.
2. In the bowl of your stand mixer with the paddle attachment, beat together the butter and sugar until smooth then add in the egg.
3. In a medium bowl, combine the flour, cocoa powder, baking soda and salt together.
4. In a measuring cup, combine the buttermilk, Coca-Cola, cherry juice and vanilla. The mixture will look curdled.
5. Add half of the flour mixture and half of the buttermilk mixture to the stand mixer. Mix until combined. Add the rest of both mixtures into the stand mixer until batter is formed.
6. Fill each cupcake liner ½ of the way full. Drop a cherry into each and cover with remaining batter.
7. Bake for 18 minutes or until a toothpick inserted in the center comes out clean. Transfer to a wire rack to cool completely.
8. While the cupcakes are cooling, whisk together the glaze ingredients in a small bowl. Drizzle a small amount over each cupcake and allow to set. (You will have extra glaze.)
9. Add the heavy cream to the bowl of your stand mixer with the whisk attachment. Beat on high speed until soft peaks form. Slowly add in the powdered sugar and continue to mix until there are stiff peaks. Spoon or pipe onto the cupcakes and top with a maraschino cherry.
Cupcakes can be refrigerated for 1 day before adding glaze and for up to 4 hours after adding frosting.

The coke flavor isn't all that prominent in the cupcake, but the cherries in the center are a really nice sweet surprise. These were immediately gobbled up at the party.