I've been trying to slowly clear out some of the less common things in the freezer. One night Tom saw a recipe that called for a hash brown broken up on top of a cheesesteak. When we bought the ingredients, the store didn't have the typical  pack of the Steak-Ums and only had the jumbo pack. So I've had quite a few Steak-Ums hanging around in the freezer.

I had no idea what to do with them (because I didn't think to ask Tom to make that sandwich again so I could blog it) and then I somehow stumbled upon this recipe. This is one of those recipes I immediately knew Tom would like. He is a huge fan of combining things like this together. 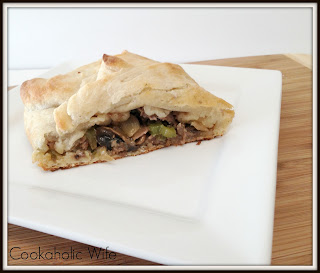 Directions:
1. Preheat oven to 425.
2. Heat olive oil in a large skillet over medium heat. Add onion, pepper and mushrooms. Cook for 8-10 minutes or until soft. Season with salt and pepper.
3. Transfer to a colander lined with a paper towel to absorb excess grease.
4. Increase the heat to medium-high and add the meat to the skillet, breaking it up and stirring frequently until it is cooked through. Drain the grease. Turn off the heat.
5. Stir in the cheeses until melted. Stir the vegetable mixture into the meat mixture until combined.
6. Roll out each pizza dough into a rectangle on a lightly greased baking sheet. Spread the meat/veggie mixture lengthwise down the center of the pizza dough. Repeat with the other pizza dough.
7. Cut slits into the sides of the dough and wrap up, crossing over each other until the calzone is formed and fully sealed. Spray the tops of the calzones lightly with non-stick spray and bake for 12-15 minutes or until golden brown.
8. Let rest for 2 minutes before cutting and serving.

I opted for the Sriracha ketchup dipping sauce and Tom went for standard pizza sauce. I really, really liked this recipe. It calls for provolone cheese which I somehow forgot to pick up at the store. Usually we have a million different types of cheese in the fridge, but for some reason we had absolutely nothing left but the fresh mozzarella and the bit of cheddar. It worked out, but I wouldn't mind trying these again with the provolone.