Day 3 of #FarmersMarketWeek! Have you enjoyed the recipes I've shared with you so far? I have one more after this one, scheduled for Friday. You've also checked out what the other bloggers have made right? Everything looks so delicious!

I had brought a thin-crust pizza dough to my aunts house with the intent to make a flatbread as an  quick lunch, but Mother Nature had blessed us with two really great sunny days and we decided to take advantage of those instead of spending time in the house. And then it was the evening before we were going to leave and I hadn't made it! We decided to have the flatbread as dinner, with neither of us being very hungry and with my uncle deciding he'd have his along with some steamed shrimp and corn on the cob.

I had brought along a zucchini as well, knowing I wanted to include that in the flatbread but other than that, I really had no idea what I was going to make. We decided to entirely wing it in the kitchen and the result was fantastic! For not being hungry due to a late lunch, my aunt and I both ate two pieces of this and debated on going back for thirds! 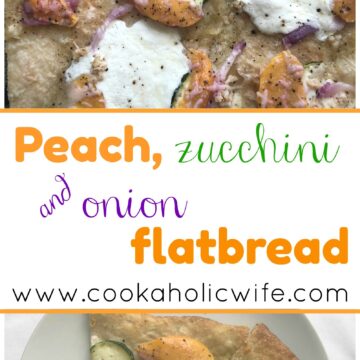 Keyword flatbread, onion, peach, pizza, zucchini
Did you make this? I want to see, soMention @CookaholicWife or tag #cookaholicwife!

It's sweet, it's salty and its full of great fresh flavors. We debated putting some roasted tomatoes on it or even proscuitto but in the end, decided to keep it as simple as possible as to not overload the thin crust and to allow the fresh flavors of the zucchini, onion and peach to really shine through.