This is another one of those posts where you might end up thinking I'm weird. I'm okay with that.

Today is Colin O'Donoghue's 34th birthday and seeing as he is favorite actor/celebrity crush/tv crush/whatever you wanna call him, I decided to share some cupcakes with you today. Funfetti ones, because sprinkles are a requirement for any birthday. 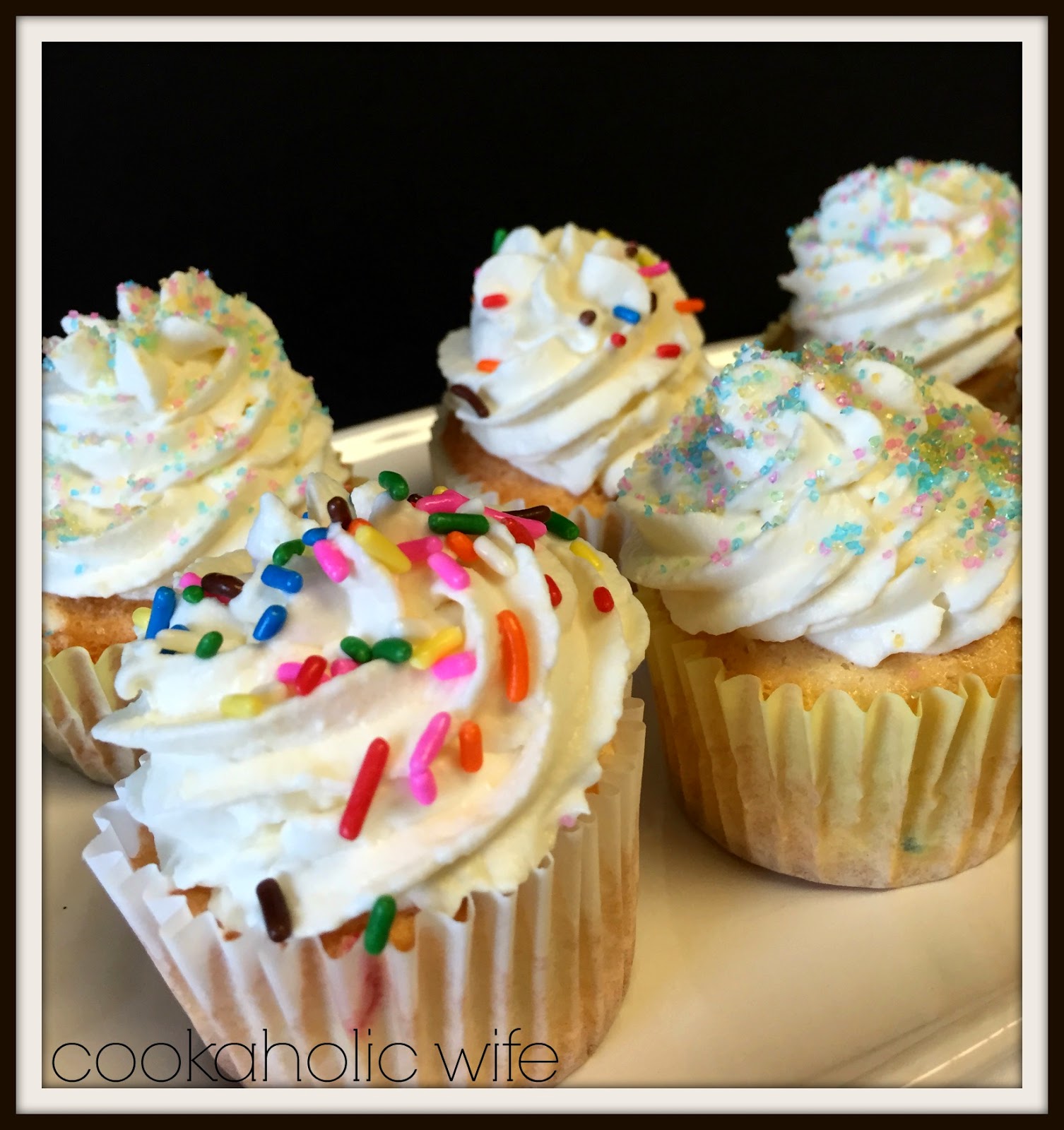 In my world, you can't go wrong with angel food cake. It's light, fluffy, airy and absolutely delicious. And then add some cream cheese frosting on top and you have my idea of heaven. Actually toss in a strawberry and I'll love you forever. But back to the sprinkles. You can never go wrong with sprinkles. I might have 20 different kinds in my pantry. Maybe.

I did intend to find out what Colin's favorite dessert was and share that with you instead today, but if you hadn't noticed celebrities are a little hard to get a hold of. I can't bring myself to be one of those people who repeatedly tweets him during an #ask session, especially since I really just have one question I want to know the answer to, (his favorite dessert) and there aren't nearly enough ways to ask that question. I did scroll through some previous #ask sessions to see if I could find anything, but all I came up with is that he changes his favorite flavor of ice cream. 🙂

This could will absolutely get long so let's get to the recipe first and then if you're interested in my fangirl musings you can read on after that. Deal? 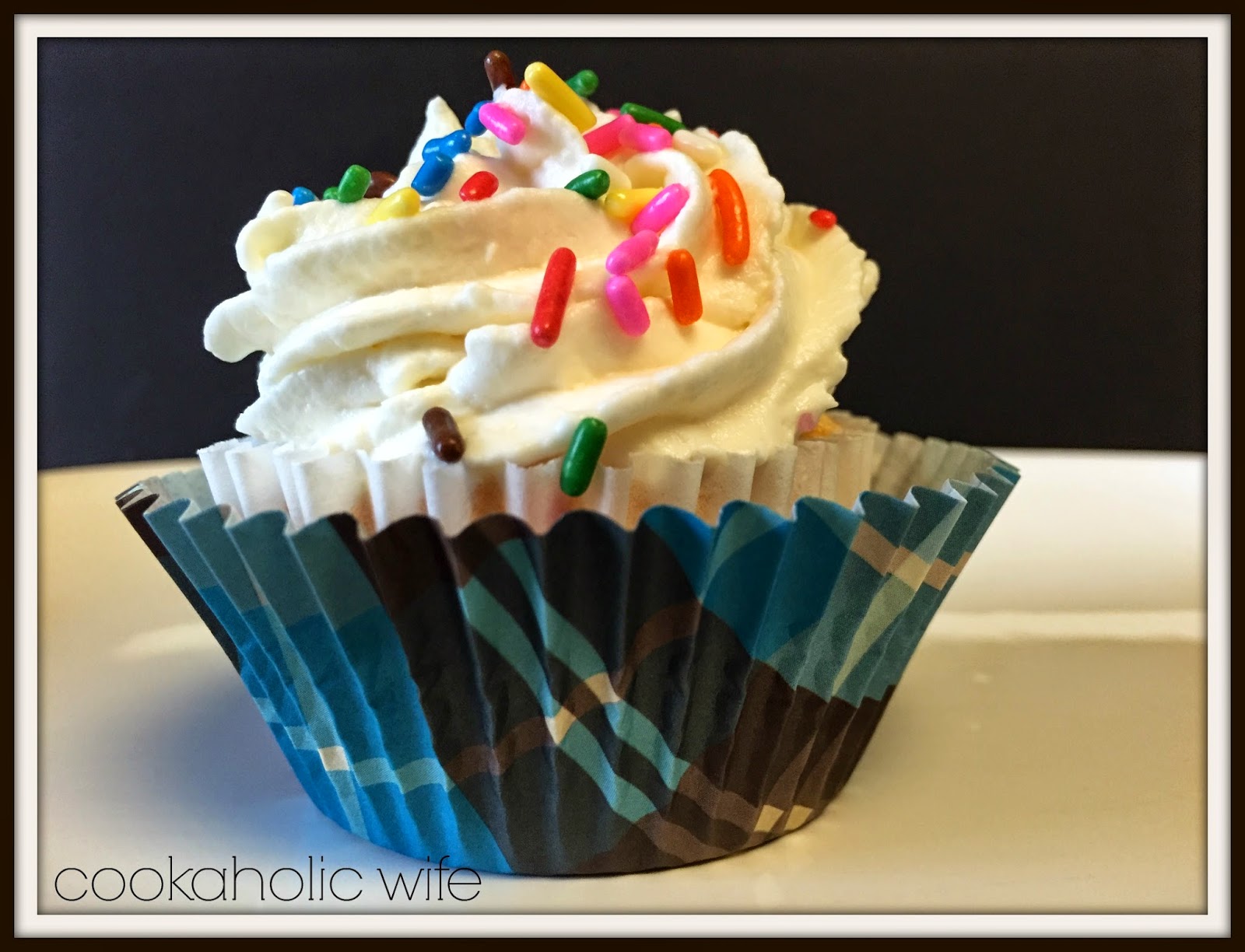 Directions:
1.  Preheat the oven to 350. Line two cupcake pans with paper liners.
2. Place sugar into your food processor and pulse until sugar is super fine, about 2 minutes. (Alternately, you could find super-fine sugar {or caster sugar} in the grocery store)
3. Sift the cake flour into a medium bowl with the salt. Sift in half of the sugar.
4. Combine the egg whites, water, vanilla and almond extract and cream of tartar together in the bowl of your stand mixer with a whisk. Turn on the mixer to medium speed and slowly add in the rest of the sugar. Increase the mixer speed to high or until medium peaks form. (Medium peaks are when a peak will form but is still loose, a similar consistency to whipped cream.)
5. Sprinkle a layer of the flour mixture on top of the egg whites and fold in gently with a wooden spoon. Repeat layers and folding until all of the flour is incorporated. Fold in the sprinkles.
6. Divide the batter into the paper liners and bake for 19-22 minutes or until lightly golden.
7. Allow cupcakes to cool completely before frosting.
8. To make the frosting, beat cream cheese in the bowl of your stand mixer until soft peaks form. In a separate mixing bowl, whisk cream cheese until it is light and fluffy. Add the cream cheese to the soft peaks of heavy cream along with the powdered sugar, vanilla and almond extracts. Start on low speed until the sugar has been incorporated then increase to high speed and beat until stiff peaks form. Refrigerate until cupcakes have cooled enough to frost.
9. Transfer icing to a plastic or piping bag fitted with your desired tip and pipe onto cupcakes. Add additional sprinkles on top of the frosting. 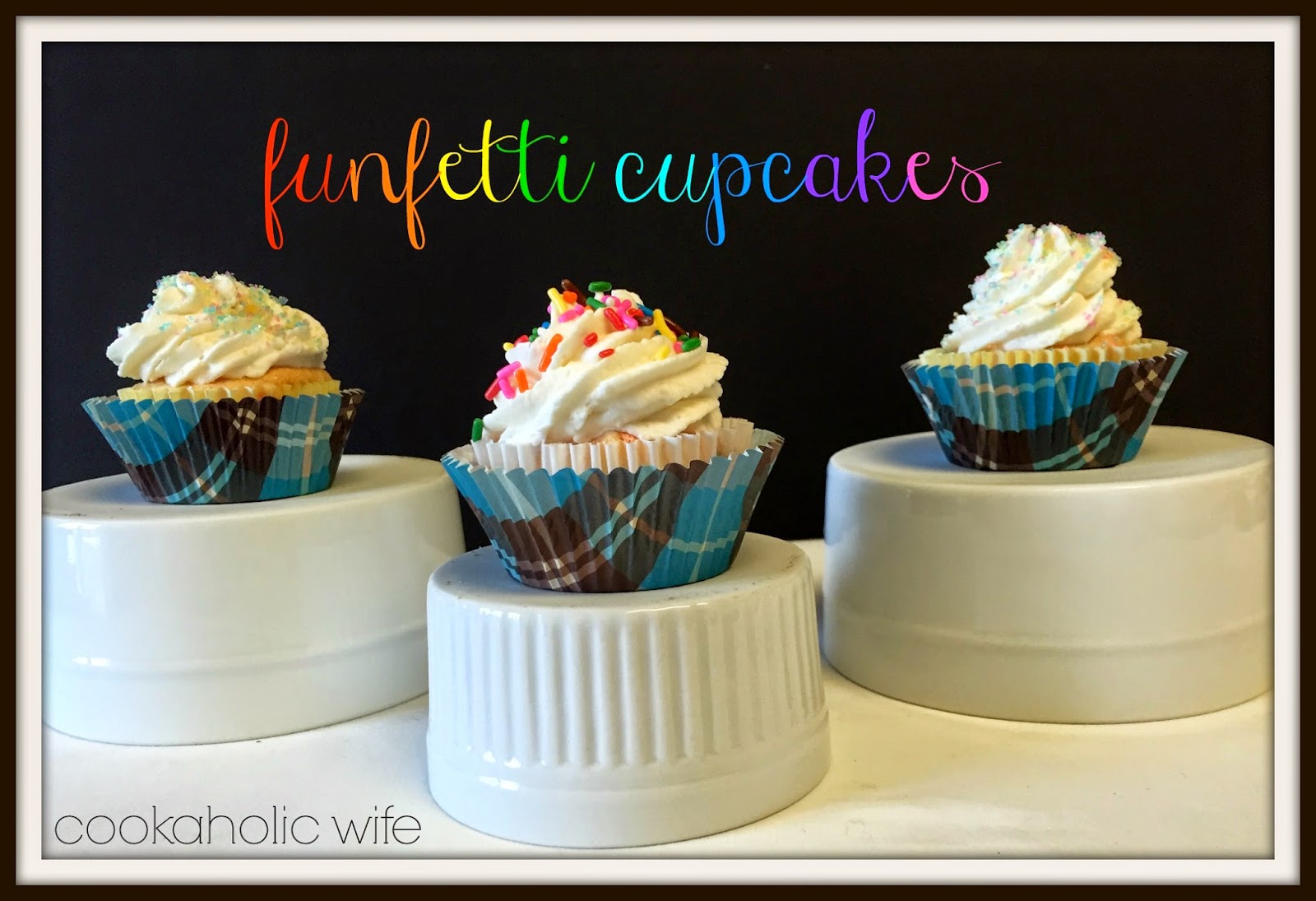 If you've ever had angel food cake or cream cheese frosting you can imagine what these little pillows of sugary heaven taste like. They do not disappoint. If you haven't had either of those things, what are you waiting for? The recipe is right there! 🙂 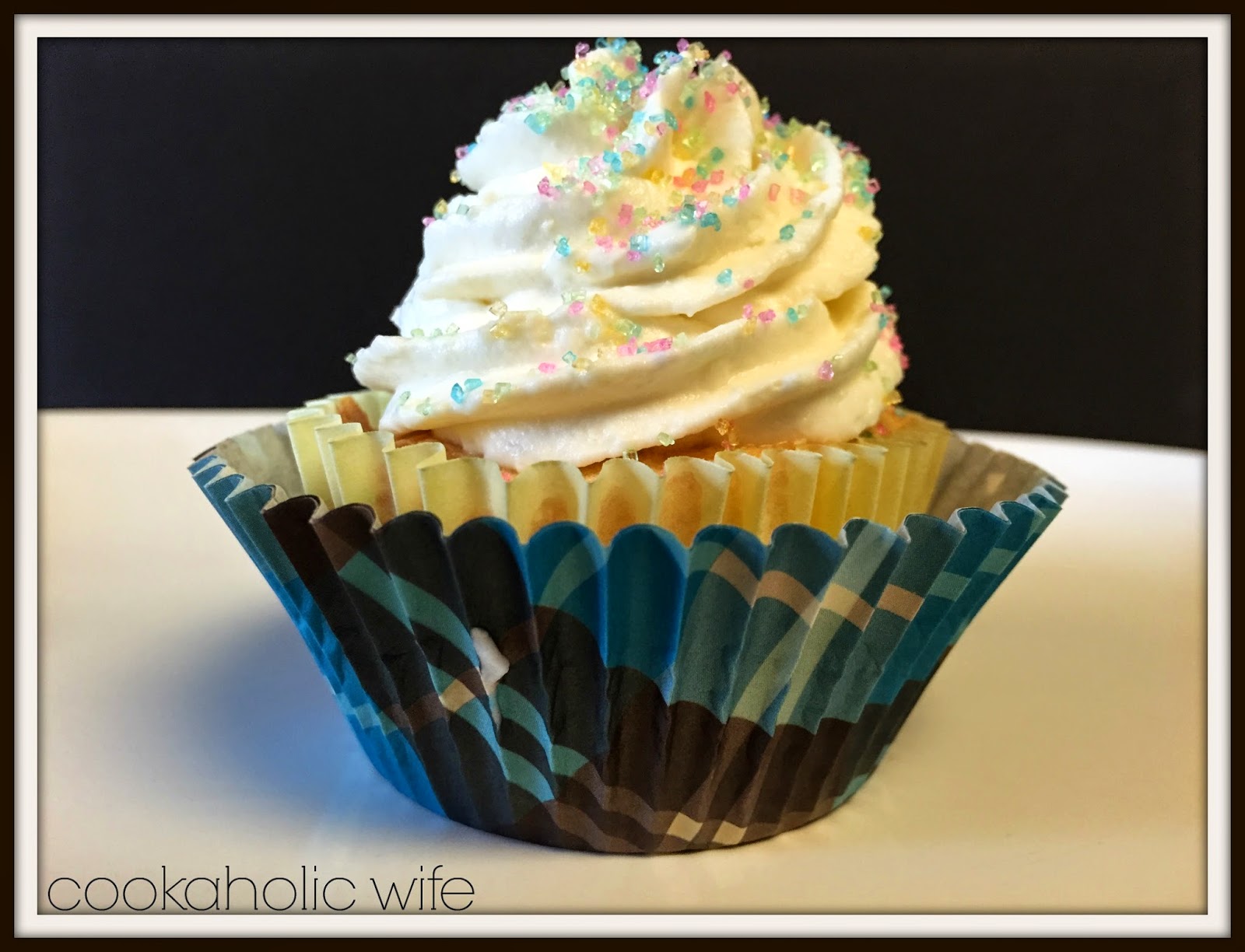 And back to the fangirling. Let's start at the beginning. For my entire life I was never big on having a bunch of celebrity crushes. I can count the number of them on one hand. Seriously. This is partly because I'm oblivious to famous people and partly because it's not just looks that leads me to have a celebrity crush. They have to be nice to their fans and just people in general. I refuse to even think they're attractive if they're totally rude. Yes, you have to meet specifications for me to like you.

So I was watching Awkward on MTV (don't judge me) and found myself thinking that the actor who plays Matty was pretty cute. Google informed me he is a few years younger than me. Not terrible but then I got the idea in my head that I should have a more age appropriate (read: older than me) celebrity crush. Thinking back to the shows I had watched recently, neon flashing lights went off in my head when I remembered Hook from Once Upon A Time.

In case you're not following, Colin O'Donoghue plays Captain Hook on ABC's Once Upon A Time. (This celebrity crush realization happened during the hiatus of Season 3) I had no idea who he was as an actor so I did what every does now and Google'd him. The more I found, the more I read, the more interested I became.

He passed all of my requirements for being an acceptable celebrity crush. I hate to objectify him like this, but let's start with the obvious of how incredibly attractive he is. I'm not even going to attempt to put it into words, so here: 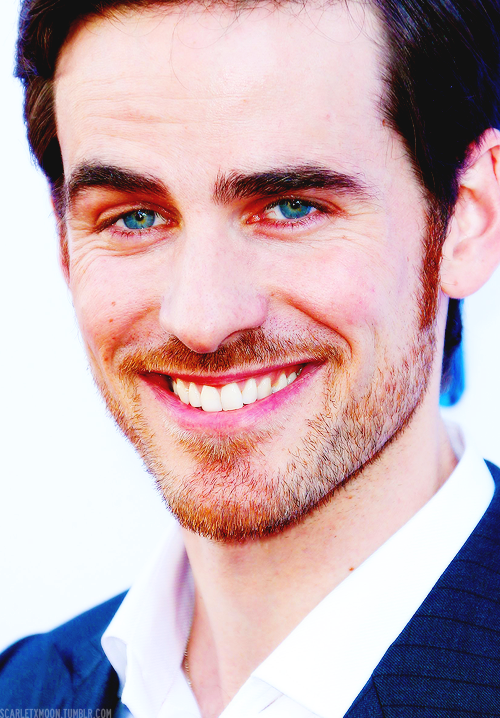 Then he's incredibly humble and very down to earth about this whole being a "hottie of the high seas" as he's been called. Like he actually blushes and gets embarrassed if people talk about how attractive he is. He also really, really seems to love his fans and seems genuinely surprised every day they show up to see him. I've read so many things saying that when fans are on set, he always comes over for pictures and autographs or waves to them or just even acknowledges that they are there. He's said many times in interviews that he's just happy people like him as Hook. Everyone who meets him talks about how nice he is. There's no conceitedness or snobbery or anything.

Then there's the fact that he's Irish and it's rather nice to listen to him talk. Even the Once cast teases him about how Irish he is. He married the woman he's been with since they were both 18 and one of my favorite things he's ever said is "my wife Helen is a teacher and she makes a real difference to kids" when talking about how actors can make differences in the lives of children. He's also said that she's the one who will tell him what people are saying about him online as Captain Hook and teases him about it.

If this wasn't enough for you, he can also sing and play guitar, and according to the cast, he's pretty much constantly playing guitar. There's an indie film coming out this year called The Dust Storm and he's the lead. I need this to be released in Maryland because I absolutely must see it.

As Captain Hook, he's this cocky, overly confident persona full of innuendos and salacious grins and smirks. The contrast between Colin as himself and Colin playing Killian Jones is fun to watch. There's times where his traits seep through into the character and vice versa. There are many scenes in Season 4 where an incredible amount of emotion needs to go into the character of Killian Jones and Colin is amazing at it. An actor who doesn't need to speak to express what the character is feeling to the audience is a damn good actor. Even if I had only previously thought of him as a pretty face, that would have changed instantly after watching this season.

His acting skills led me to do something I never do. Unfortunately, the movies he has been in are of the horror/thriller variety. I don't do those type of movies. Ever. However, I was so curious to see him as someone other than Captain Hook, I sucked up my fear of scary movies and watched them. I'll be honest, Storage 24 was a terrible movie but I wasn't watching it for the plot, I was watching it to see him act. Which despite the ridiculousness of the plot, was rather good. (And you get to hear him curse and watch him smoke, if that's your thing.) I really hesitated before watching The Rite because I knew it would be darker and scarier than the other, but I finally put myself through it and it wasn't that bad. Okay, fine I did look away from the screen a few times. And again, I was impressed with his acting. He's just really, really good.

I also need to issue an apology to Johnny Depp and anyone else I insulted back when Pirates of the Caribbean came out and I said "guys wearing eyeliner is like the creepiest thing ever." because Colin + eyeliner? Totally okay with that.

I'm pretty confident that I could hold my own while meeting famous people. You'd probably assume that being a food blogger, someone like Alton Brown or Bobby Flay or Anne Burrell would be terribly intimidating for me to meet, but that's not the case. I wish I could say that if ever given the chance to meet Colin, I'd have some awesome question or great line or something to actually say to him. But I am fairly certain, should Colin ever be in my presence, I'd be a speechless slack jawed mess. There might even be some hysterical laughter at the sheer absurdity that we could be in the same place at the same time. Pathetic, right? 🙂 Also kind of terrifying for me since one of my goals is to go to Vancouver when they're filming one day.

So let's end on that note. Happy Birthday, Colin - the one person I'm sure I'd be a complete idiot in front of if I ever met.

I lied. One more thing. After typing up this post, I got on Tumblr and saw where someone was calling Colin this combination of adorable puppy dog and sex god. This lead to him being called a cupcake with the cake part equaling his adorableness and the frosting being the sex god part of him. So this post is now only more fitting. Colin = cupcake. And then because Colin is commonly photographed wearing plaid of some sort, it was too perfect not to put these cupcakes in plaid wrappers.