Indiana Pork Tenderloin Sandwich is a pan-fried slice of pork tenderloin served on a potato roll with a creamy, cheesy corn relish.

Update: This recipe was originally posted in March 2016. The recipe and photos have been updated and republished in February 2021.

It's not very often I'll find a recipe that both Tom and I love enough to make frequently, but this recipe is definitely one of them. I originally found the recipe in Cooking Light magazine and have changed it up a little bit to be even more amazing.

What is an indiana pork tenderloin sandwich?

This sandwich has two main components - the pork, which is thinly sliced, battered and pan-fried to crispy perfection, like a pork schnitzel. And the corn relish - which is made mainly of corn, bell peppers and cream cheese. The corn relish is similar to maque-choux and I've adapted the recipe to bring in more of those flavors.

Midwest breaded pork tenderloin seems to be a popular dish claimed by many midwestern states. Pork tenderloin is pounded thin and coated in a batter before being fried. This version of the sandwich tends to be served on a bun with just mayo and pickles. Which sounds good...but the corn relish is amazing and I think you'll prefer the sandwich with it. 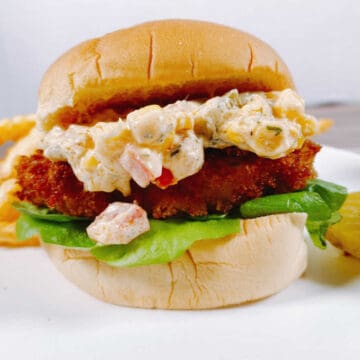 For the Corn Relish

For the Corn Relish

Fresh or frozen corn can be used. If frozen, thaw for 10 minutes first. Chicken can replace the pork in this dish if you aren't a pork fan.  Remaining corn relish can be refrigerated for 3 days. 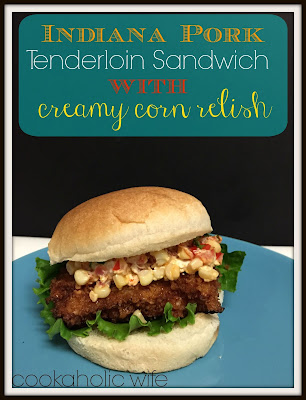