Over the weekend, we had a challenge at work - to bake a cupcake that looked like a turkey. We were given a few pictures as inspiration. I haven't made a lot of cupcakes recently, but I was up for the challenge so I picked up some candy corn and pretzels and got to work!

What are thanksgiving turkey cupcakes?

These cupcakes are your classic, homemade vanilla cupcake with chocolate frosting, but they are decorated to look like turkeys. They're perfect for Thanksgiving or fall, and easy enough that kids can help make them too!

This section includes affiliate links. If you purchase something from this section, I may earn a small fee, but it charges you nothing. Please refer to my disclosure page for more information.

Beat butter and sugar in a mixer until smooth. In another bowl, whisk together flour, baking powder and salt. Add egg whites two the mixer, followed by the vanilla. Then mix half of the flour mixture and half of the milk. Repeat to use the rest of the flour and milk. Fill a cupcake pan with liners. Divide batter to fill each cavity ⅔ of the way full. Bake in a 350 degree preheated oven for 18-20 minutes. Let cool in the pan a few minutes, then transfer cupcakes to a wire rack to finish cooling.

Beat butter in a mixer until light and fluffy. Add in cocoa powder, followed by powdered sugar, salt and milk. Transfer to a piping bag fitted with a large round tip.

To decorate the turkey cupcakes:

Cover the top of the cupcake with chocolate frosting in an even layer, then pipe the frosting in a circle in the center to create the face. Place two pretzels at the back of the cupcake. In front of that, add 4-5 candy corn with the white tip pressed down. Place 3-4 chocolate chips on either side of the cupcake to create the front feathers. Attach to candy eyes to the top of the raised frosting and gently press in. Use an additional candy corn to press directly under the eyes, creating the mouth/neck of the turkey. 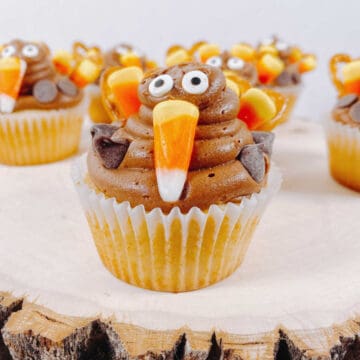 Keyword baking, thanksgiving dessert, thanksgiving turkey cupcakes
Did you make this? I want to see, soMention @CookaholicWife or tag #cookaholicwife!