Victoria Sponge Cupcakes are a light and airy cupcake filled with blackberry jam and a sweet buttercream frosting. The theme for #BakingBlogger this month is Baking for a Tea Party. Would you believe I’ve never had a tea party? Even as a kid, I didn’t host them for my stuffed animals or anything. Not like I need an excuse to have a party, but I think I need to plan one and have it be for high tea.

What would be more fun than getting to dress up and eat finger foods and sip tea? It sounds the like perfect girls only party to me! Victoria Sponge Cake was named after Queen Victoria who enjoyed having a slice of the cake with her afternoon tea. It is traditionally a sponge cake of two layers with whipped cream and strawberry jam in between the light and fluffy layers of cake. Because I feel like most food for tea parties is finger food, I decided to switch these out to cupcakes and forego the whipped cream as a frosting because of stability. (It’s humid here already!) And while traditionally made with strawberry jam, I’ve had a jar of fancy blackberry jam sitting in the fridge waiting to be used for something special. These cupcakes were totally it! 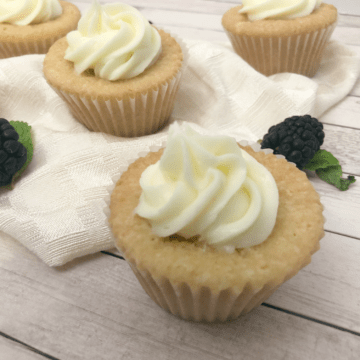 For the Cupcakes and Filling: I’ve made and eaten a lot of cupcakes in my life (so far) but this was definitely one of the best ones I’ve ever had. Seriously! The cake portion practically melts in your mouth and then it’s perfectly sweetened with the blackberry jam. I honestly didn’t even need that little dollop of buttercream on top, but it definitely makes for a much pretty presentation! Baking for a Tea Party