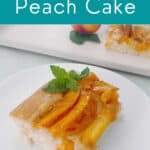 Baltimore Peach Cake a recipe from the 1800's: a yeasted sweet cake, topped with fresh peaches and a peach glaze.

Update: This recipe was originally posted in May 2017. The recipe and photos have been updated and republished in July 2022.

Nothing makes me happier than when I can find fresh peaches in the grocery store. They have such a short season that I buy them in bulk and make as many recipes as I can before they're gone again.

What is Baltimore Peach Cake?

Baltimore Peach Cake is more of a sweet bread - a yeasted dough is made and proofed, then cinnamon sugar peach slices are added to the top before baking.

History of the Baltimore Peach Cake

In the 1800's there was an abundance of peaches grown on the Eastern Shore of Maryland and transported all over via train. The cake makes its first appears in the newspaper back in 1886 and one of our local poets even wrote a poem about it.

Yeasted cake recipes became less popular in the 1900's but you can still find this Baltimore recipe in many of our local bakeries.

First, proof the yeast. Heat the water to between 100-100 degrees F and sprinkle the yeast on top. Let sit for 5 minutes until bubbly.

Then, scald the milk. Add the milk to a small saucepan over medium high heat and whisk frequently until bubbles appear around the edges of the milk. Remove from the heat. Let cool a few minutes, then whisk in the melted butter, sugar, salt and lightly beaten egg. Transfer to the bowl of a stand mixer.

Next, prepare the dough. Add flour to the wet ingredients in the mixer, ½ cup at a time until a soft dough forms. Mix on medium speed until the dough comes together, then transfer to a lightly floured surface and knead for 5 minutes. Place in a greased bowl and cover. Let dough rise 1 hour, then punch down and let it rise for another 30 minutes.

Then, assemble for baking. Grease a 9x13 baking dish or sheet with butter or baking spray. Stretch out the dough to reach the edges of the sheet and prick the center with a fork, leaving ¼-1/2 inch border. This will ensure the dough does not rise too much. Layer the peaches on top of the dough, in single lines, overlapping each slice. Sprinkle the cinnamon sugar on top.

Finally, bake the Baltimore peach cake. Bake for 30 minutes in a 350 degree preheated oven until dough is golden brown. Remove from the oven. Add peach preserves to a bowl and microwave for 30 seconds until warm, stirring to thin out. Brush the preserves on top of the cake. Let sit 15 minutes before slicing into squares.

How do you remove skin from peaches?

Cut an "X" into the bottom of the peaches and place in a pot of boiling water for 1-2 minutes, until the skin starts to lift up. Transfer to an ice bath, and once cool enough to handle, peel the skin.

How do you stop peaches from turning brown?

Squeeze lemon juice on top of sliced peaches and cover them to stop them from turning brown.

Where can I buy a Baltimore Peach Cake?

If you aren't interested in making your own, you can purchase one from Fenwick Bakery, Overlea Bakery and Richardson Farms all located in Baltimore.

What is a yeasted cake?

Yeasted cake fell out of popularity (King Cake aside) but it is a cake made similiarly to any basic dough - yeast is proofed and added to a flour/milk/egg/sugar/salt mixture and formed into a dough before rising and being baked. 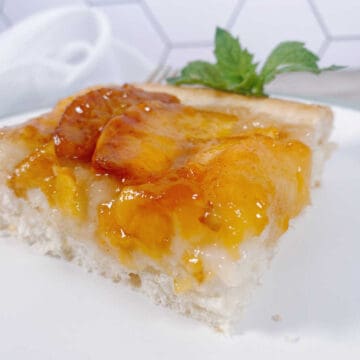 Recipe Adapted from The Baltimore Sun.