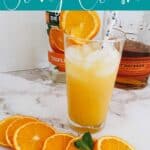 The Bulleit Bourbon Orange Crush is a take on the Maryland beachs' classic summer drink - the orange crush - made with Bulleit bourbon, Triple Sec and freshly squeeze orange juice.

I love bourbon! It is my spirit of choice, despite the strange looks I get when I say that in social settings. Apparently it's quite the flex to be a woman who loves bourbon. Who knew?!

The Bulleit Bourbon Orange Crush is hands down my favorite cocktail in the world. I've taught many a bartender how to concoct this cocktail and introduced it to many people as well. Even those who thought they didn't like bourbon ended up a fan of this drink!

What is a Bulleit Bourbon Orange Crush?

You may have heard of an orange crush before, it is one of the most popular drinks served at the Maryland beaches. It's made with vodka, Triple Sec, freshly squeezed orane juice and is usually topped with a lemon-lime soda.

I had this drink for the first time at a restaurant called Rare & Rye in Ocean City, Maryland. I have no idea if they created this recipe or found it elsewhere, as they are now closed, but I'll be forever grateful they added it to their menu and I was lucky enough to come across it!

First, fill a glass with ice. Traditionally the ice would be crushed, but cubes work just fine.

Then, generous pour in the Bulleit bourbon. I like to add at least 2 ounces of bourbon, but for a large glass you can go up to 4. This drink is intended to be strong!

Next, pour in your Triple Sec. Pour that triple sec right on top of the bourbon.

Then, add in the freshly squeezed orange juice. If you cheat and used regular orange juice it doesn't really change the recipe.

Finally, stir it all up and enjoy! Garnish with a fresh orange slice or a sprig of mint if desired.

If you love bourbon as much as I do, you'll love these other cocktails featuring bourbon:

And there is also the time where after consuming a bunch of these bourbon and orange juice concoctions that I may have mixed up an entire batch of kielbasa that my family was planning to cook, without a recipe. I'm a food blogger, I get a pass right?!

Regardless of what silly and hilarious things you may get yourself into after having a couple bourbon crushes, you'll make some great memories, and I hope you love this drink as much as I do!

Here's a picture of the bulleit bourbon crush I took while enjoying them at Rare & Rye. 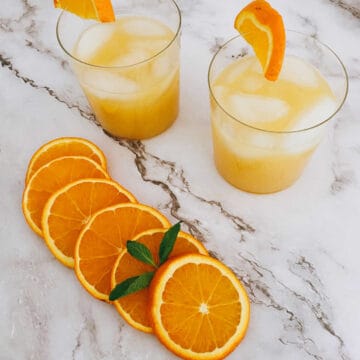