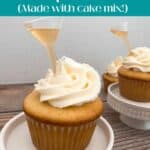 Boozy Bourbon Cupcakes are the perfect cupcake for the bourbon (or whiskey!) lovers in your life. Bourbon is added to every part of the the cupcake; the batter, the glaze and of course, the buttercream frosting!

Update: This recipe was originally posted in May 2019. The recipe and photos have been updated and republished in October 2021.

I love bourbon! It is my favorite type of liquor and I always have at least one bottle on hand. One day I was searching for some type of recipe and came across a Jack Daniels cupcake. My first thought was "there are not enough alcoholic cupcakes in the world" so I decided to change that by creating this bourbon cupcake.

What are boozy bourbon cupcakes?

These cupcakes are easy to make as they start out with a white or yellow boxed cake mix. Bourbon is added into the batter before they are baked, then bourbon is brushed over the still warm cupcakes. And finally, bourbon is added to the buttercream frosting to make sure there's no way to miss that bourbon flavor!

These liquor-flavored cupcakes are hands down one of my most popular recipes! When I first made them, I took them into work and they disappeared in minutes. From then on, my coworkers would always ask me to make them again. I even turned them into a cake recipe when my boss at the time was celebrating his 40th birthday.

Equipment for this recipe

If you purchase something from one of my links below, I may receive a small commission for it. Please see my disclosure page for full information.

If you love bourbon as much as I do, you'll love these other bourbon recipes:

Can you make bourbon cupcakes with cake mix?

Yes, that's how I made this recipe using white cake mix. I have also used yellow cake mix. Chocolate would be a great substitution as well. And of course, you could always make your cupcakes from scratch

What kind of whiskey or bourbon do I use in my whiskey cupcakes?

That's up to you but I'd choose a bourbon or whiskey that you like to drink. Bulleit Bourbon is my favorite and what I always have on hand, so I used that in this recipe.

Does alcohol make the frosting separate?

It can, which is why I beat the butter until fluffy first, then slowly add in the powdered sugar and remaining ingredients before adding in the bourbon. You can also add in more powdered sugar after you add the bourbon if your frosting becomes too thin.

How long do bourbon cupcakes last?

A frosted cupcake, stored in an air-tight container should last for 3-4 days, but these cupcakes are so delicious you'll find they go very quickly! 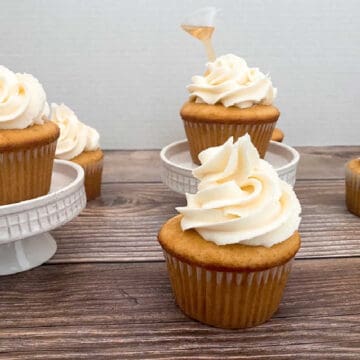