I love a good glazed ham recipe. It's the perfect main dish for your holiday dinner table. Most times you can purchase an already cooked ham, which is great, but why not dress it up a little bit with an easy to make glaze? As I've mentioned a bunch of times, I love bourbon. Not just in a cocktail, but also to cook with.

What is a honey bourbon baked ham?

This recipe is delicious and full of flavor. You heat up a precooked ham and then baste it with a glaze made from honey, bourbon, brown sugar and butter. What could be easier than that?

Serving Suggestions and Other Ham Recipes

A baked ham is such a versatile dish! For Easter, Thanksgiving or Christmas, you can serve it as a main dish with side dishes like Perfect Creamy Mashed Potatoes, Parmesan Parsley Roasted Potatoes, Italian Green Beans or Grilled Lemon Parmesan Asparagus. 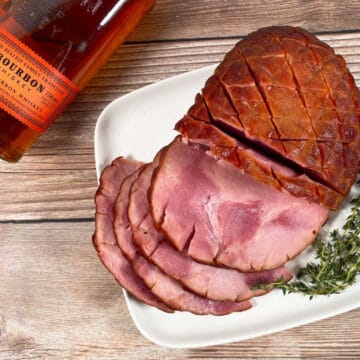 This recipe was made using a ¼ ham that was 2 lbs. There is enough glaze for a 4 pound ham. If cooking a larger ham, click on the 2x or 3x at the top of the recipe to increase the amounts needed for the glaze. Ham will need to cook an additional 10-15 minutes per additional pound. Divide glaze to add more every 10 minutes of baking.