Brown Sugar Mountain Dew is a sweet ham glaze, made with brown sugar, MNT DEW soda and spices. Spread over a ham and baked, it will make the ham the star of your dinner table.

Update: This recipe was originally published in April 2012. The recipe and photographs have been improved and the recipe re-published in November 2020.

So suffice to say, I expected nothing when creating and sharing this recipe initially. Boy was I wrong. It cracks me up how often this recipe is searched for. But, seeing that it is, it was in desperate need of an update and overhaul.

Why Mountain Dew, you may be wondering. Well, my husband is an avid Mountain Dew drinker and at the time the recipe was first shared, I was struggling to find recipes that his picky palate would like. Randomly purchasing a ham on sale, I had looked around my pantry trying to figure out what in the world to do with it.

Brown sugar was a typical glaze ingredient for ham, but I needed a liquid. Glancing around the pantry, my eyes landed on a two-liter bottle of MNT DEW soda and I knew I had to create a glaze using it.

The verdict for brown sugar mountain dew ham? He absolutely loved it. While the ham does not completely take on the flavor of the soda, it's sweet with a nice crunch from the brown sugar baked on top.

FAQ's for baking a ham

what to make with leftover ham 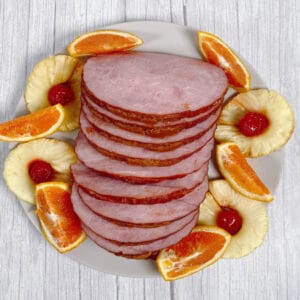 Keyword Christmas ham, Easter ham, ham glaze
Did you make this? I want to see, soMention @CookaholicWife or tag #cookaholicwife!