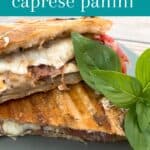 Eggplant Prosciutto Caprese Panini is a mouthful of a sandwich - literally. Grilled eggplant, fresh sliced tomato and mozzarella and salty prosciutto come together in a ciabatta bun for a flavorful sandwich you're sure to love.

It has been ages since I've had a panini. We used to have an Italian restaurant nearby that one of the most delicious caprese prosciutto paninis I've ever tasted. Craving that recipe, I decided to elevate it a little bit by adding in some grilled eggplant. Enter the Eggplant Prosciutto Caprese Panini!

Substitutions for this panini

Serve this eggplant panini with:

The Improv Cooking Challenge ingredients for August are eggplant and tomato. Check out what the other bloggers have made using these two ingredients! 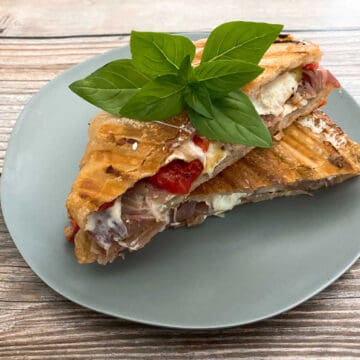 Substitutions: skip the bread and use the grilled eggplant as the bread instead. Replace mozzarella with burrata cheese. Replace balsamic with pesto or roasted red pepper sauce. Prosciutto can be omitted or replaced with ham or Italian meats like sopressata or capicola. Add arugula for a peppery flavor.