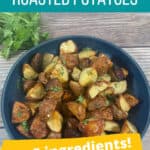 Soy Cilantro Roasted Potatoes are a flavorful twist on the classic roasted potatoes recipe. These potatoes are tossed with soy sauce and olive oil and are topped with fresh cilantro after they're roasted.

Update: This recipe was originally posted in March 2014. The recipe and photos have been updated and republished in February 2022.

This recipe actually dates back to when I first started blogging, way back in the ancient yesteryear of 2010. I'll be honest, I never intended to make this recipe, it was a complete accident, but they're such tasty little potatoes that of course I had to share!

What are soy cilantro roasted potatoes?

Soy Cilantro Roasted Potatoes are a case of multi-tasking gone wrong. I was planning to serve roasted potatoes with ahi tuna one night and instead of adding the soy sauce to the tuna marinade, I dumped it over the bowl of potatoes.

But I decided to just wing it and move forward. The soy sauce ended up providing a great marinade to the potatoes, making them the right amount of salty. And because the ahi tuna I was making was garnished with cilantro, I figured "why not add it to the potatoes too?"

The recipe gained some traction in a food blogging group I was in and the rest is history.

Start off by preheating the oven to 450 degrees. Line a baking sheet with foil and spray with nonstick.

Then cut up the potatoes. Rinse the potatoes and cut them into quarters. Place into a medium bowl.

Next, season the potatoes. Add soy sauce to the potatoes, toss, and let sit for 5-10 minutes. Then add olive oil and toss to fully coat. Spread out the potatoes onto the prepared baking sheet in an even layer.

Finally, garnish and serve the potatoes. Sprinkle freshly chopped cilantro on top of the potatoes and season to taste with salt and pepper. Serve immediately.

How to make roasted potatoes in the air fryer

I love potatoes in the air fryer! To adapt this recipe, use a mister to spray olive oil on the potatoes. Then air fry them at 400 degrees for 13-15 minutes, until crispy, turning over once halfway through cooking. 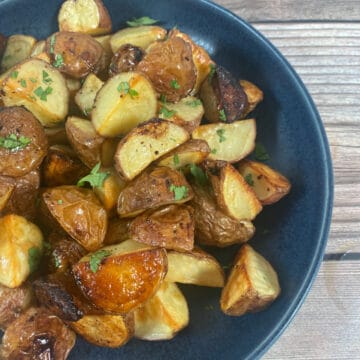