Old Fashioned Apple Crisp is a classic apple dessert where apples are baked underneath a flour, melted butter, sugar and oat crumble topping. It's best served warm with a scoop of vanilla ice cream.

Good old apple crisp - the easy to make dessert recipe that uses up basic pantry staples and a handful of apples. Honestly, I've probably made at least two apple crisps for every year that I've been blogging (that will be 11 years shortly), yet I've never shared this recipe with you.

There is a bit of a debate when it comes to apple crisp - to add oats or not. I've made the recipe both ways and like both of them the same. But I always have oatmeal on hand so I typically add it to my crisp topping for this recipe. 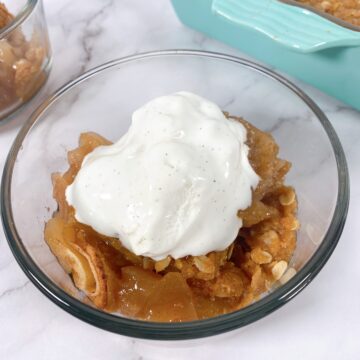 Honeycrisp, Jonathan and other sweet/tart apples are great for baking.  Substitutions - a 50/50 mix of whole wheat and all purpose flour can be used. Butter can be replaced with coconut oil or applesauce. Nutmeg can be omitted. Reduce the granulated sugar to ⅛ or ¼ a cup if you want to cut back on sweetness, or you are using sweeter apples.

Keyword apple crisp with oats, old fashioned apple crisp
Did you make this? I want to see, soMention @CookaholicWife or tag #cookaholicwife!