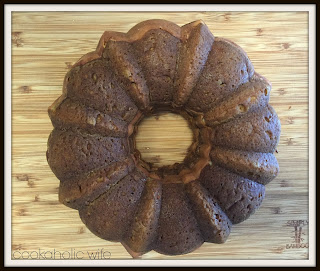 There are so many pumpkin cream cheese recipes out there that trying to narrow it down to one to actually make was really difficult. I found quite a few recipes that said they were skinny varieties but in looking at the ingredients and other comments I couldn't figure out where they were saving these magical calories from. So I decided to Frankenstein this recipe together from a few of them I found online, picking and choosing which "healthy" ingredients I wanted to use without compromising the taste of the cake. 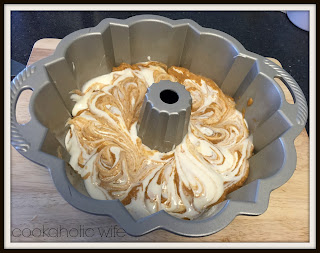 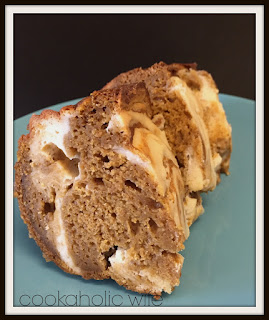 for the cake batter:

for the cream cheese:

Directions:
1. Spray and flour a bundt pan. Preheat the oven to 350.
2. In a medium bowl, whisk together the flours, sugar, baking soda and pumpkin pie spice. Set aside.
3. In a large bowl, whisk together the pumpkin puree, applesauce, egg whites and egg. Slowly stir the wet ingredients into the dry, using a spatula to mix. Do not overmix, but make sure there are no clumps of flour remaining.
4. In the bowl of your stand mixer, beat the cream cheese and sugar together on medium speed for 3 minutes or until light and fluffy. Reduce the speed and add the egg white and vanilla, mixing until combined.
5. Spread half of the pumpkin mixture into the bundt cake and top with dollops of the cream cheese mixture, using about half. Stir with a fork to get the swirled effect. Add the remaining half of the pumpkin mixture on top and then the cream cheese mixture. Swirl again with a knife.
6. Bake for 55-60 minutes or until a toothpick inserted in the center comes out clean.
7. Slice into 16 wedges and serve. Cake can be refrigerated in an airtight container for 3 days. 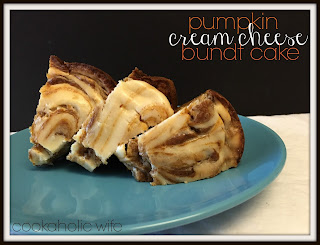 I took half of this cake into work and no one believed me that it was on the healthier side. Pumpkin puree already does wonders for making a cake moist but adding in applesauce instead of oil only increases that. With it being a wetter cake, I knew I could use more whole wheat flour than white without it getting dense and heavy.